Slow down DJ, Play To The Room!

Slow down DJ, Play To The Room!

So many of Toronto’s most beautiful and fantastic weddings happen in very original spaces. From mansion houses to old restored churches; from re-imagined jazz clubs to funky original restaurant/event spaces, today’s reception standard is anything BUT standard. Given that these weddings and their locations are so original and imaginative, shouldn’t the music reflect that too?

Weddings are different than clubs for more reasons than I should have to explain here. Having said that, we have all been to a wedding with a DJ who insists on treating the ballroom at the gorgeous Sunnybrook Estates as if it was his feature set before last call on Richmond street. Going louder, bigger and clubbier is amazing, so long as that is what the party is asking for. For the other 98 percent of the time, it is a far more eclectic and unique recipe of ingredients that cooks up the perfect dance floor.

While most professional wedding DJ’s will know this, we will give you a little insider advice to make sure that your DJ is in the know. Here are a few factors that we think are crucial to wedding dance nirvana: 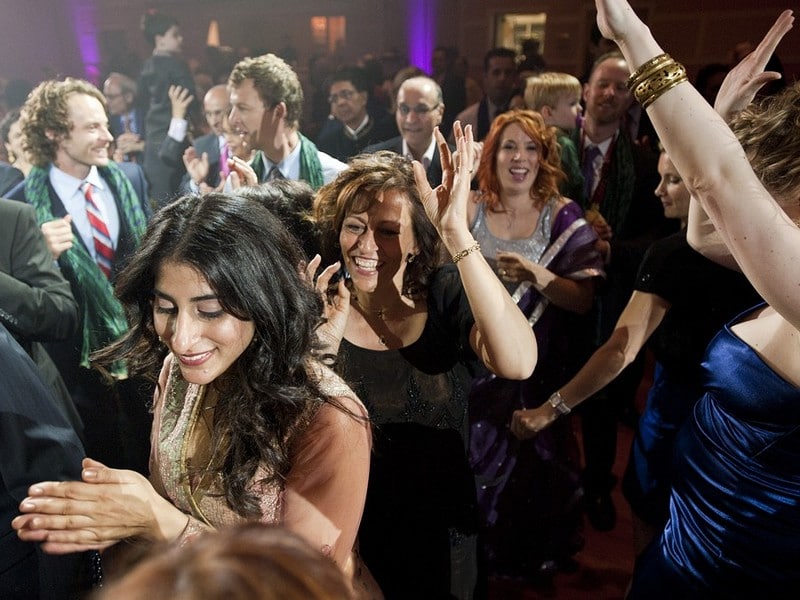 Vendors Featured in this Article

Often the bride and groom will give the DJ a playlist. It is all too often that those meticulously thought-out suggestions are all but overlooked, save for Blurred Lines which the DJ really was going to play anyway.  The truth of the matter is, the wedding playlist is gold. If the bride loves Ke$ha, it will be on the list and she will dance to it!  If the groom happens to love Motley Crue, it will be on the list, and while he may not dance, he will definitely clink glasses to it at the bar and sing along with his buddies. The secret to success here is to fearlessly do what you are told.  If it were my wedding, I would genuinely want to hear Black Box and Beastie Boys and yes, they would both be on the list. Accept no substitute.

Similarly, taking requests is actually very much a part of a wedding DJ’s job. As opposed to a club DJ (who the owner controls) making the music intentionally loud enough so that no one can talk and new enough to reflect the clubs’ coolness, a wedding has none of these restrictions. Rather, the reception DJ is literally there for the happiness of the people around him. We’re not here to suggest that the bird dance or Britney Spears are necessarily the greatest requests to take but often, if a few wedding party guests or family members request it, it will be played!  And they will most certainly dance to it!! And what more can a wedding DJ ask for?

Yes age is a huge factor in what people listen to. Think of your own music taste.  More often than not it will be songs from your early years that stick with you for the rest of your life.  From rock to funk to disco to newwave to hiphop, every generation has dance music that they love. If you are playing music for the family it is important for a DJ to note the difference between parents in their 60’s vs. 50’s as it is the difference between playing Beatles and Rolling Stones hits vs. Phil Collins and Bruce Springsteen. Similarly, Old School is important to be careful with. Dancers in their 20’s listened to entirely different hip hop growing up than those over 30, the difference between Dr. Dre’s Nuthin But a G-Thang and Lil Jon’s Get Low. While I will agree that generalizing is a dangerous thing as not everyone over 50 loves the Rolling Stones and not everyone under 30 loves Jay-Z, it is still  a great way to play the odds as mostly this remains true.

Similarly, culture plays a huge part in what music a dance floor will love AND what it will not love.  If your guests are from the country, chances are they love country music.  If they are from Portugual, chances are they love Portugese music. The same is true for every culture in the world. The trick is getting to know the room and taking in the diversity and understanding the differences between different areas of the world.  India is a great example as the north around Punjab mainly listens to Bhangra, central around Mumbhai is more interested in Bollywood while the south is far more inclined to love merengue, salsa and cha cha. Again, generalizing can be dangerous, but most of the time, these generalizations will get a DJ far closer to the legendary dance floor they desire.

The biggest common element to all of the above room-reading techniques can really be summed up in one word: Listening. A great wedding/event DJ will listen and create a setlist that reflects that room’s unique tastes. SO the next time you are at an event with a dead dance floor and a DJ that doesn’t seem to get it, at least you will have something to talk about while you are sitting around the table with your friends. Just try not to sound like a know-it-all.

Search for your Vendor

The Dos and Don’ts of Creating the Perfect Wedding Website

Success! Your email has been delivered.